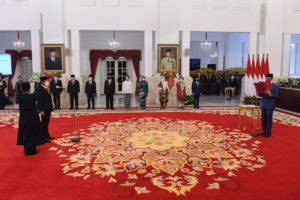 The inauguration was held based on Presidential Decree Number 140/P/2021 on the Dismissal and Appointment of Head of the National Disaster Mitigation Agency (BNPB) stipulated in Jakarta on 16 November 2021.

The ceremony began with the reverberation of national anthem “Indonesia Raya” and followed by recitation of the Presidential Decree by Deputy Minister of State Secretary for Employee Administration Affairs Nanik Purwanti. Suharyanto then took an oath of office led by President Jokowi.

“I do solemnly swear that I will uphold the 1945 Constitution of the Republic of Indonesia and execute all laws and regulations in the fairest way possible for the service to the nation and the people. In carrying out my duties, I will uphold the ethics of my position, work to the best of my abilities, and fulfill my task with full responsibilities,” the oath reads.

Suharyanto was appointed as the successor to BNPB Head Ganip Warsito, who is going to retire from the position. Suharyanto graduated from Military Academy in 1989. His previous positions include Military Secretary to the President and Commander of Military Area V/Brawijaya. (FID/UN) (RAS/MMB)