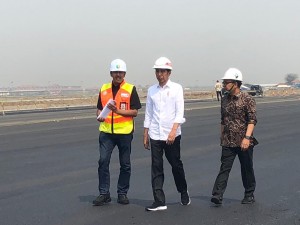 “I have instructed the Minister to evaluate the regulation because there is a difference between the policy and the actual conditions,” President Jokowi answered questions from reporters during his inspection of the construction progress of the third runway at Soekarno Hatta Airport, Tangerang, Banten (21/6).

The President went on to say that every region has its own character. For that reason, he instructed Minister of Education and Culture to evaluate the school zoning system that is regulated in the Ministerial Regulation.

On the occasion, the President also suggested the reporters to directly ask the Minister regarding the issue. “There are indeed several issues on the ground that must be settled,” the President added. (RSF / ES)