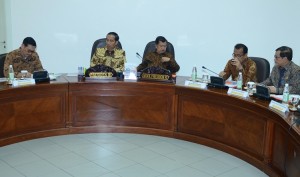 President Joko Jokowi Widodo has instructed related ministries and institutions to immediately evacuate the victims of haze in a number of regions in the country because the condition is already very unhealthy now.

We must be focused on extinguishing the fires and tackling the impacts of the haze in a massive scale. I hope all ministries could concentrate and step in on the ground, to especially rescue children and babies, the President said before the limited cabinet meeting on efforts to tackle the haze crisis at the Presidential Office, Jakarta on Friday (23/10).

The President added that evacuation did not have to be done to other cities because the victims can be evacuated in the cities as evacuation in other cities will be more difficult.

We can probably evacuate them in the offices of regents or in other government buildings that can be used (to shelter) babies and children. We can cover the buildings to prevent the haze from coming inside. I think we have them all, the President said.

Regarding the recovery efforts to the victims of the haze, the President instructed the Minister of Health to also cooperate with the private sectors and state-owned enterprises.

I suppose efforts to rescue them must begin, be it to help those affected by respiratory infections and other health problems as a result of this haze, he added.

Meanwhile, President Jokowi also instructed Minister of Education and Culture to step in because many students might be restless preparing themselves for the national exam. The President also asked the Minister to check the preparations of the test by the end of this year.

We really have to prepare the ways out. Schools and students must be informed so they can be calmed in preparing the exams, the President said.

The President also asserted that forest fires are a problem that the whole country is facing.

He also gave his support for the initiatives of the public to douse the fires and to tackle the haze due to the fires.

He further expressed his hopes that all elements of the country, be it the Indonesian National Defense Forces (TNI), the National Police and (related) Ministries could exert all their forces to tackle all these problems and help the victims.