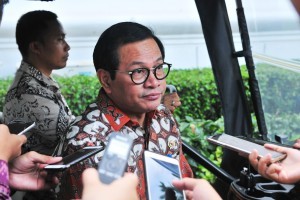 President Joko Jokowi Widodo reminded all Cabinet ministers and the leaders of government institutions to disseminate the Governments achievement to the people, according to Cabinet Secretary Pramono Anung.

“The President also reminded (the ministers and the leaders) not to convey something that has not been done,” Pramono Anung told the journalists after attending a Plenary Cabinet Meeting at the State Palace, Jakarta, Wednesday (5/12).

Pramono added that some of the programs that have been carried out by the Government are the Healthy Indonesia Card (KIS), the Indonesia Smart Card (KIP), the Family Hope Program (PKH), land certificate distribution, rice-for-the-poor, and other programs.

“The emphasis (of the dissemination) is the the Government’s achievement. he said.

Pramono went on to say that the next priority for the Government is human capital development.

The President has instructed all Ministries and Government Institutions to prepare everything related to the development of human capital, Pramono said, adding that the Government has allocated more budget for the human capital development. (RAF/JAY/ES)