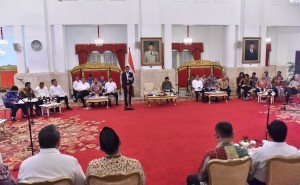 Jokowi gives directives on a Plenary Cabinet Meeting at the State Palace, Jakarta, on Wednesday (3/1)

Even though 2018 is a political year, President Joko Jokowi Widodo called on all Working Cabinet ministers to keep stay focus on their tasks, particularly the tasks to increase economic growth, address social gap, and reduce poverty rate.

The statement was made by President Jokowi when he, accompanied by Vice President Jusuf Kalla, led the first Plenary Cabinet Meeting for 2018 Fiscal Year at the State Palace, Jakarta, on Wednesday (3/1).

The President reminded all that international trust to Indonesia is rising considering the Government has made a number of achievements, such as permit reform, de-regulation, and improvement in ease of doing business.

According to the President, the main factor of that upgrade is efforts made by the Indonesian Government to keep improving the resilience of economies to shocks, including external shocks. We are also able to maintain the stability.What we have done last year should be improved in 2018, the President added.

Regarding the efforts to alleviate poverty and social gap, the National Statistics Agency (BPS) recorded that the number of people living in poverty in September 2017 reached 26.58 million people or 10.12 percent of the population. The figure decreased by 0.52 percent compared to the result in March 2017, which reached 27.77 million people.

However, President Jokowi asserted that the Government still needs to carry on the task to reduce poverty gap index, and poverty severity index both in rural and urban areas.

Also on that occasion, President Jokowi reminded all that inflation rate and staple food price stability should be managed. The President also hopes that Rice for Prosperity Food Subsidy (Rastra), a Non-Cash Food Subsidy that is planned to be distributed earlier this year can be allocated in a timely manner to the right target.

The President also instructed Ministry of Public Works and Public Housing, Ministry of Transportation, Ministry of Agriculture, and Ministry of Marine and Fisheries Affairs to immediately implement Cash for Work program through the Village Fund or labour intensive program.

I just received a report from the Minister of Finance that 20 percent of Village Fund to be disbursed in January. The fund should be immediately used to support Cash for Work program, President Jokowi added.