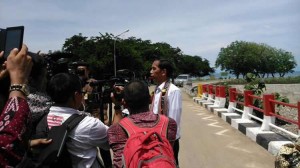 In that visit, President Jokowi instructed the immigration service to finish the administrative service in one door only and not in manual way.

According to the President, in 2015, the government will be managing many facilities and quality services in border area including immigration, customs, security, and quarantine.

Now, all we have to do is to improve services in the border whether it is customs, quarantine, police or health, President Joko Widodo said it after reviewing the facility condition in the border of RI-Timor Leste.

President Jokowi reminded that all should be integrated in one roof and one door. But the most important thing for the public is to be served well. We will see the outcome and income and we will totally change it next year, he revealed.

Besides, the President also affirmed the governments plan to improve the life quality and welfare of people in the border.

You can see by yourself that people in the border area are less of attention and we will start the preparation (managing process), Jokowi affirmed.

According to President Jokowi, actually the border has a big budget to develop the area but it is divided with 27 Ministries therefore it is often less focus.

That is what we are going to change, we want to be focus and its budget also will be focused on physics first, when it is finished then we can enter the service system, Jokowi said.

President left Kupang to Atambua by riding on Air Force helicopter in order to observe the condition of that area directly. Next, President Jokowi and his entourage returned to Kupang.

The Groundbreaking of Raknamo Dam

After visiting the border, President Jokowi continued the agenda to conduct the groundbreaking of Raknamo Dam that has 14,9 million meters cubic water capacity .

The water from the dam will be used to irrigate rice fields in the downstream for 1.250 hectare (Ha) and to fulfill the basic water needs with debit 100 liter per second or it is equal with the fulfill of water needs for 100.000 heads of family.