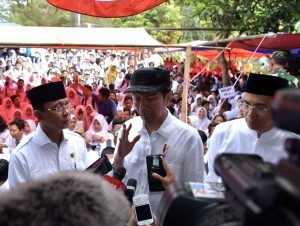 This school, SMP 6 Mataram, even though Ministry of Public Works and Public Housing has declared that the school can still operate, due to a lot of cracks and worrisome constructions, the kids are afraid to study inside the building, President Jokowi told the reporters after the inspection.

Therefore, President Jokowi immediately ordered to repair the school immediately. According to the plan, the repair will begin tomorrow (4/9) by PT Wika Gedung. The construction will apply injection method, repairing the cracked walls and fixing the collapsed ceiling. During the rehabilitation, all teaching and learning activities will be done outside the building, the President continued.

In addition to this Junior High School, President Jokowi also said that other schools are going to be repaired once they have been checked and audited.

The reconstruction and rehabilitation will be financed by regional governments and the central Government. Meanwhile, the budget value to be borne by the State Budget is still being calculated.

Not yet, we have not determined it because we must check it first and audit the level of damages. It will be calculated later. But, I order to begin the construction, the President said.

Previously, President Jokowi also inspected the construction of Healthy Modest Instantaneous House (RISHA) in Kekait Village, Gunung Sari Sub-district, West Lombok Regency. According to the President, the residents are free to choose the type of construction used to build their houses, as long as it can withstand a quake.

The construction must be monitored and assisted by engineers from Ministry of Public Works and Public Housing so that the house is quake-resistant, whether the house uses wood, bamboo, or brick, let the residents decide, the President said.