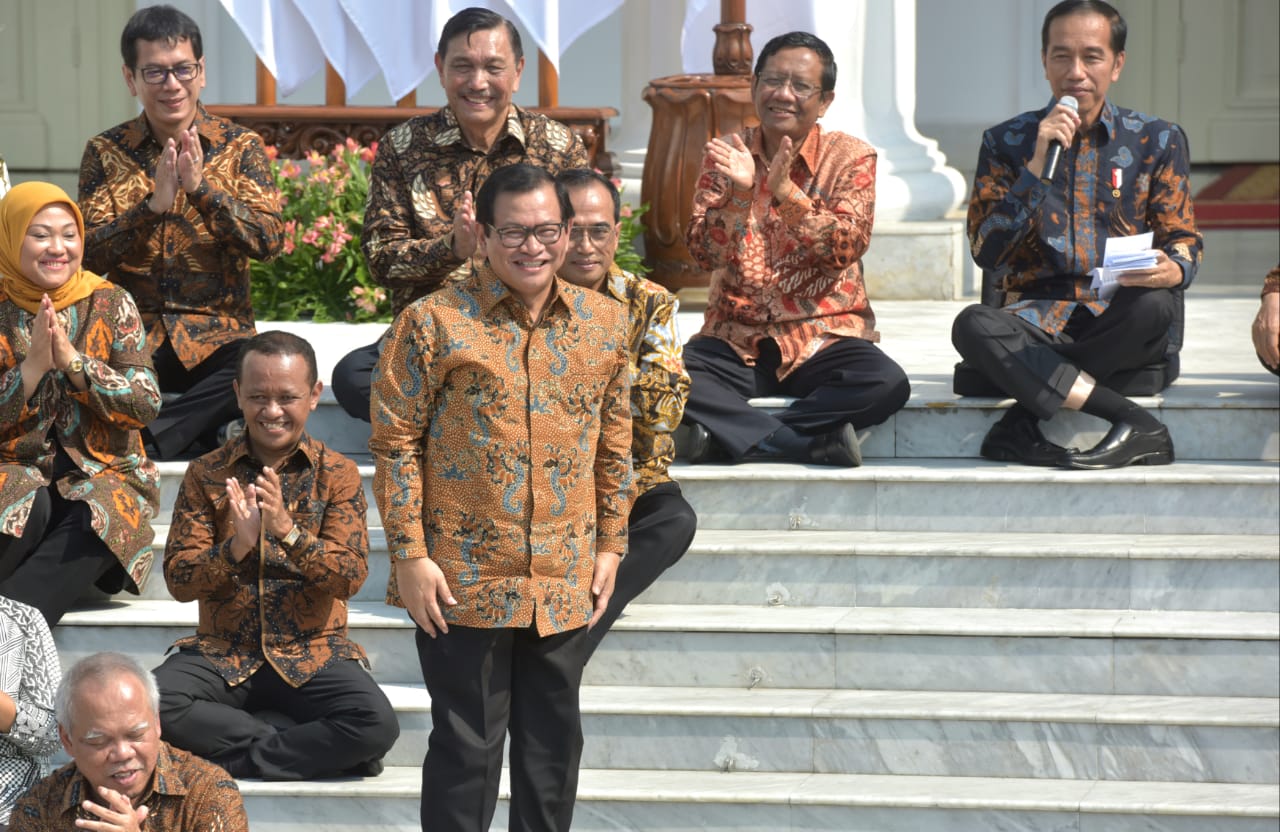 The President explained that the Cabinet would focus on developing human capital, job creation, and empowering micro, small, and medium enterprises (MSMEs).

The cabinet lineup is as follows:

Airlangga Hartarto as Coordinating Minister for Economic Affairs, who will design breakthroughs and synergies between ministries to increase employment opportunities, to reduce the current account deficit and the trade balance deficit, to develop export-oriented industrialization, as well as to find alternatives for import substitution.

Prof. Muhadjir Effendy as Coordinating Minister for Human Development and Culture, who will speed up poverty eradication and lead mental revolution movement.

Luhut Binsar Pandjaitan as Coordinating Minister for Maritime Affairs and Investment, who will  design breakthroughs in the framework of Indonesia as the world’s maritime fulcrum, handle investment barriers, and attract major investment.

Yasonna Hamonangan Laoly as Minister of Law and Human Rights, who will oversee the Omnibus Law for the Employment Copyright Act and also the MSMEs Empowerment Act.

Sri Mulyani, who is re-appointed as Minister of Finance considering her capability in handling investment-friendly tax affairs, debt to GDP ratio affairs, and current account deficit.

Founder of popular ride-hailing app Gojek Nadiem Anwar Makarim as Minister of Education and Culture, who is expected to make significant breakthroughs in developing human capital who are ready to work and to synchronize education and industry.

Agus Gumiwang Kartasasmita as Minister of Industry, who will handle export-oriented industrialization, find alternatives for import substitution, and find technology for MSMEs.

Agus Suparmanto as Minister of Trade, who will handle export, import, and trade balance.

Arifin Tasrif as Minister of Energy and Mineral Resources, who will realize new and renewable industry as well as reduce import on oil and gas.

Basuki Hadimuljono, who is re-appointed as Minister of Public Works and Public Housing.

Budi Karya Sumadi as Minister of Transportation, who will accelerate connectivity between roads, airports, sea ports and industrial areas, tourism areas, and logistics.

Johnny Gerald Plate as Minister of Communication and Informatics, who will work on cyber crime handling, data sovereignty, and information technology industry.

Syahrul Yasin Limpo as Minister of Agriculture, who will work on food security issues and increasing agriculture productivity.

Siti Nurbaya Bakar as Minister of the Environment and Forestry, who will focus on green industry, social forestry, carbon trading, as well as forest fires.

Edhy Prabowo appointed as Minister of Maritime Affairs and Fisheries, who will handle fishery industry and maritime tourism.

Abdul Halim Iskandar who is appointed Minister of Villages, Development of Disadvantaged Regions and Transmigration.

Sofyan Djalil as Minister of Agrarian and Spatial Planning/Head of National Land Agency, who will work on land certifications and land redistribution.

Tjahjo Kumolo appointed as State Apparatus Empowerment and Bureaucratic Reforms, who will focus on de-bureaucratization, building core government and IT system.

Erick Tohir as Minister of State-Owned Enterprises, who will bring the Ministry to expand to the global market.

Teten Masduki as Minister of Cooperatives and SMEs, who is responsible in  strengthening the capital skills and networks of MSME actors to enter global market as well as bring modernization to the cooperatives throughout the country.

Wishnutama Kusubandio appointed as Minister of Tourism and Creative Economy.

Moeldoko as Presidential Chief of Staff and Pramono Anung as Cabinet Secretary.

Bahlil Lahadalia appointed as Chairman of the Investment Coordinating Board (BKPM).

ST Burhanuddin  as Attorney General, who will maintain legal independence while uphold the rule of law.  (DND/RAH/ES)