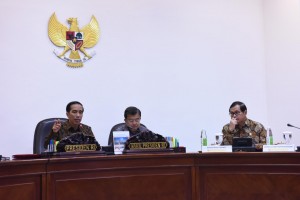 I see there are much waste and there are many parties that want to solve the issues., However, the regulation makes it difficult, President Jokowi said when leading a limited meeting discuss on waste management converting into electric power, at the Presidential Office, Jakarta, on Monday (7/12).

According to the President, based on his experiences when served at the regional governance for 10 years, the problem could not be fixed due to the complicated regulations.

In my opinion, if there is a clear regulation, it (waste management) is possible to be implemented, and all cities will be clean. The target is not about the price of electricity but how to clean the cities from waste and it could be useful to make energy, President Jokowi said.

Regarding the problem of prices, the President added, it could be taken from Governments subsidy if it is not included in PLNs (State-Owned Electricity Company) calculation. However, this afternoon, we want to talk about the implication of the regulations which allows the investors to immediately invest in Indonesia, but somehow there will be no waste, President Jokowi said while hoping the target of new and renewable energy in 2025 could reach 23 percent.