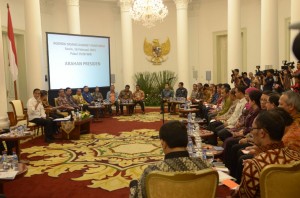 When giving an introduction, President Jokowi said that the meeting was intended to discuss the first 100 days or three months of his government, both in the process of working, as well as in the consolidation process of the organization.

“In the evening we will be evaluating a bit, and also some things that are also related with the governance structure and relationship, ranging from the President, Vice President, Coordinating Minister etc., to the Ministers, Governors, Regents/Mayors, and others,” President Jokowi said.

According to the President, it should be understood together, that is in our ministries, in the Work,Cabinet approximately of 70-80 percent had never been a minister, had never been in government. Therefore, adjustments need to be addressed so that all the lines from the central government to the provincial and district/city should be no obstacles or problems.