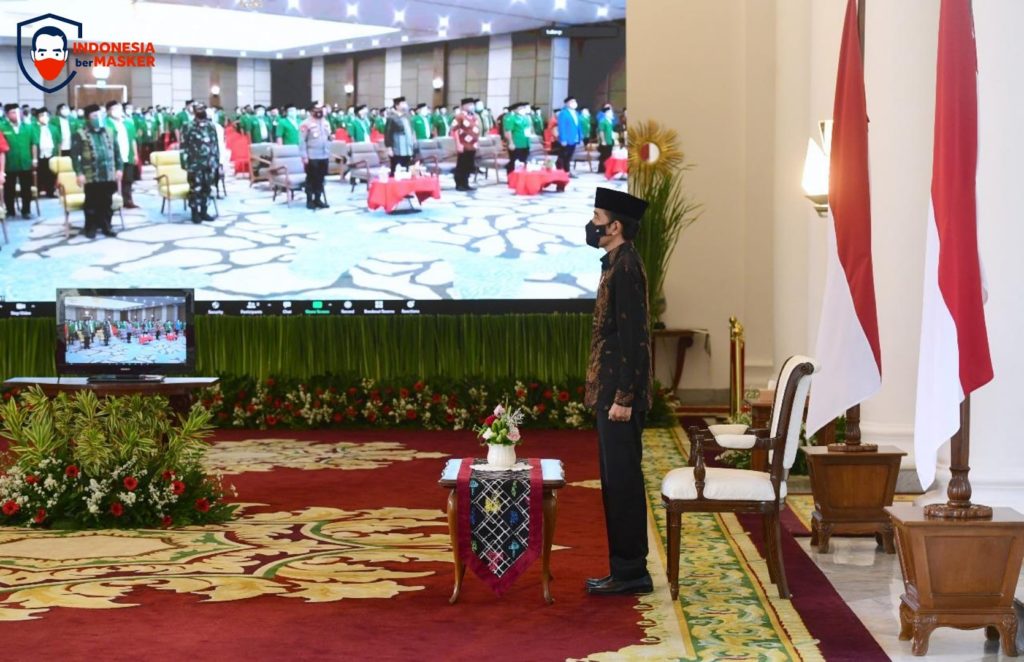 President Jokowi delivers a speech at the inauguration of the opening of the XXIII Grand Conference of the Ansor Youth Movement in 2020 via video conference from the Bogor Presidential Palace, West Java Province, Friday (18/9). (Photo by: Twitter account @jokowi)

President Joko “Jokowi” Widodo invited all members of the Ansor Youth Movement (GP) to be proud of and love domestic products, buy and promote products of local farmers, fishermen, and micro, small, and medium enterprises (MSMEs).

“I am sure that with this joint movement, we will not only help the lives of farmers, fishermen, and MSMEs but also drive the national economy,” the President stated at the inauguration of the opening of the XXIII Grand Conference of the Ansor Youth Movement in 2020 via video conference from the Bogor Presidential Palace, West Java Province, Friday (18/9).

The COVID-19 pandemic, President Jokowi said, has raised tremendous anxiety and fear, possessed a direct impact on human health and safety, as well as in the economic and social fields.

The supply of goods and services, according to the President, is hampered, economic growth slows down, millions of people lose their jobs, work patterns and social relations change, as well as various other impacts.

In this situation, President Jokowi stated, the toughness of a nation faces a test. To that end, he expressed the belief that everyone should be in one frequency and keep their spirit alive to work hard in physical and mental endeavors.

“Mental endeavor includes increasing the frequency of dhikr, seeking forgiveness and repentance from Allah, increasing donations and alms, especially today, many of our brothers and sisters have lost their jobs and need our help,” the President said.

Therefore, the President invited all members of the Ansor Youth Movement, both individually and collectively, to intervene together with the Government and other elements of the nation to help ease their burden.

The President also stated that a person who believes in God must learn from every occurrence. “Because we believe that in every incident and creation of Allah, there is a lesson, nothing is in vain,” he said.

The pandemic, according to the President, also provided valuable lessons for all about the importance of independence to stand on their own feet.

“May Allah immediately erase the pandemic from the land of Indonesia, May Allah protect and save our nation and country, make the Indonesian nation a developed nation, victorious under the forgiveness and pleasure of Allah. Baldatun thayyibatun wa rabbun ghafur,” the President said. (TGH/EN)