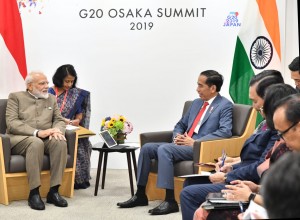 President Joko Jokowi Widodo has expressed appreciation for India’s support for the ASEAN Outlook on Indo-Pacific as an Indonesian cooperation initiative to be adopted by the group at the ASEAN 34th Summit in June this year.

I am sure the ASEAN and India can boost the Indo-Pacific cooperation, President Jokowi said during a bilateral meeting with Indian Prime Minister Narendra Modi on the sidelines of the G20 Summit in Osaka, Japan, Saturday (29/6).

President Jokowi also encouraged the negotiations on the Regional Comprehensive Economic Partnership (RCEP) to be completed this year.

For the record, the Indo-Pacific is a concept of cooperation between countries along the Indian and Pacific Oceans by prioritizing the principle of openness and respect for international law, whereas the RCEP is a free-trade agreement between the ten member of ASEAN along with China, Japan, South Korea, Australia, New Zealand, and India.

During the bilateral talk, President Jokowi also highlighted the importance of both countries to eliminate barriersboth tariffs and non-tariffs in an attempt to achieve the 50 billion USD of trade targets in 2025. In this regard, the President specifically asked his Indian counterpart to pay special attention to the implementation of new import tariffs on Indonesia’s palm oil exports in January this year.

We need to encourage our Ministers of Trade to continue the talk to achieve a win-win solution, President Jokowi added.