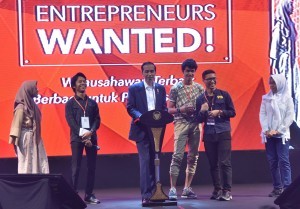 President Joko Jokowi Widodo invites more youths to immediately enter the business world in today’s digital economy. The President mentioned that Indonesia has an opportunity of USD 130 billion in the next five years.

“In the future, digital economy gives opportunity to the youths. There is an opportunity of USD 130 billion in our country in the next five years,” President Jokowi said in his keynote speech in Entrepreneurs Wanted! event at the Sasana Budaya Ganesha Building, Bandung Institute of Technology (ITB), Bandung, Monday (18/2) morning. The event organized by the Office of Presidential Staff in collaboration with ITB was attended by about 1,000 young people or millenials from various universities in the country.

Although it is not easy to start running a business, the President encourages the youths to change the paradigm of not all of them to be employees after college.

According to the President, business opportunities are currently very wide open, not in an old but with new way. Particularly, digital economy that provides great opportunities for the youths who want to run business.

The President asks young people to take advantage of the USD 130 billion opportunity that is open in the next five years. He invites them to quickly become entrepreneurs as an option rather than compulsion. “It is different now. We have the freedom to interact with high speed, so seize this opportunity,” the President said.

To that end, President Jokowi invites young people to gain knowledge and learn from anyone, anywhere including from a successful entrepreneur in order to recognize the failure and not easily give up. “If you fall, rise again, I think everyone that has been successful must have ever failed. In entrepreneurship, there is no such thing that you succeed in the first business you run,” the President said and added that we can start running business at any time but never will be if we do not start.

The President asks young people not to feel reluctant to run a business, especially the creation of new entrepreneurs in Indonesia is deemed urgent considering the data from the World Bank, Indonesia has only 3.3 percent of entrepreneurs from the total population. “The figure is still behind compared to Singapore 7 percent, Malaysia 5 percent, and Thailand 4.5 percent,” the President said.