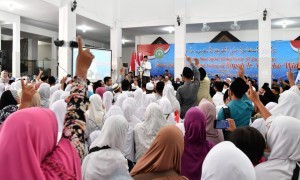 President Joko Jokowi Widodo once again called on people to maintain solidarity and harmony amidst Indonesias diversity. Indonesias identity, the President added, is its diversity in culture, custom, religion, and language.

The President also reminded the participants that Indonesia is a big country consisting of  714 ethnicities, and various languages as well as local cultures. Despite our differences, we must maintain the unity, live in harmony, and enjoy the diversities that are blessed by God. We are all compatriots, do not forget that, the President firmly said.

On that occasion, President Jokowi also mentioned about the upcoming election. He reminded people that that elections be it for regent, mayor, governor, and president are quinquennial events. Thus, the President asked all to not sacrifice our ukhuwah (brotherhood) because of this democratic fiesta.

In that event, the Head of State also signed an inauguration inscription of low-cost apartment buildings (rusun) of Darul Ulum Islamic University. The development of apartment buildings is one of the Governments projects which is implemented by Ministry of Public Works and Public Housing for 2018 Budget Year.