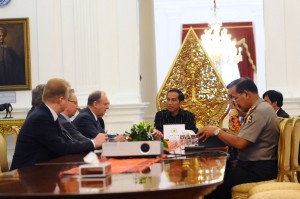 Referring to the statement delivered by Minister of Foreign Affairs Retno LP Marsudi after accompanying the President, the meeting that lasted nearly an hour discussed measures to  strengthen cooperation on security sector.

Furthermore, Retno added, the meeting also discussed the situation in the Middle East and cooperation to bring peace and stability to the region.

The President explained the efforts which have been made by Indonesia and invited Russia to participate in the efforts to bring peace to the Middle East, Retno said to the reporters.

In the meeting, Patrushev reiterated the invitation from the Government of the Republic of Russia to President Jokowi to attend the Russia-ASEAN Summit to be held in May, in Sochi, Russia.

The President said that he will attend, Insya Allah,  Retno said.

President Jokowi, Retno added, also verbally invited Russia to attend as an observer at the upcoming Organization of  Islamic Cooperation (OIC) Extraordinary Summit to be held in Jakarta in March 2016.

Russia is one of the four observers. The President verbally invited Russia to the Summit, although we have the written invitation as well, Retno said.