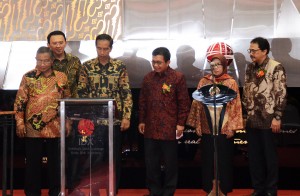 Although 2015 is a tough year for Indonesia because we faced many challenges in the economy, President Joko Jokowi Widodo is optimistic that in 2016, Indonesia can be better than last year.

What it means? It means what we have been worried about did not happen. Perhaps, if we work indifferently, peoples worry will come true. However, with deregulation which launches every week, every two weeks, I believe this is the opportunity for us, President Jokowi said in his remarks when opening the 2016 stock trade at the Jakarta Stock Exchange (BEJ) Building, Jakarta, on Monday (4/1) morning.

President Jokowi explained that at hard times, when the economy went down, it is our chance to reform the bureaucracy that obstructs us. We will do it and I am sure with the reform, our economy will be better, the President said.

The President also said that budget absorption reached 91.2 percent or about Rp 2,810 trillion, slightly missed the estimation of 92-93 percent and there is Rp 10.8 trillion of unused funds (SILPA).

Regarding the economic growth, President Jokowi estimated it will reach 4.7-4.8 percent or decrease about 5 percent than 2014. Actually, if we were optimistic last year, it would turn out well. However, the optimism is hard to grow, everybody just wait and see, the President said.

Therefore, President Jokowi asked the people to to be optimistic this year that we will be better. It is a must. That is the key, the President firmly said.

The President mentioned that the 2014 inflation rate was 8.3 percent. According to the President, it is set under 5 percent at first, but many people do not believe it. Alhamdulillah, the inflation rate in 2015 was only 3.3 percent. Bank Indonesia has worked hard, as well as the Government. We trully monitor the demand and supply everyday, the President said.

According to President Jokowi, he also calls the Minister of Trade, the Head of State Logistics Agency (Bulog) and the Minister of Agriculture whether it is at midnight or at dawn.

I work hard, Bapak/Ibu are optimistic and believe that we will be better in 2016, that is our expectation, the President said while adding that it is impossible to carry out the protection and excessive subsidies in this era of competititon where the ASEAN Economic Community (MEA) will begin.

In the event, President Jokowi also encouraged all enterprises, whether they are small, medium, and big-sized enterprises to revaluate their assets. The President believes, it will lead to the issuance of tax amnesty. People shall not worry about what will happen later.

If the tax amnesty is issued, it means that the Government and the President provide the guarantee, so people shall not in doubt.  Thus,  assest revaluation should not be applied on big and medium- sized enterprises only, but also on small-sized enterprises. It is a power which will increase our economic growth, President Jokowi said.