President Jokowi: Issue of Decline in Purchasing Power is Groundless 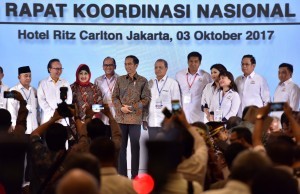 President Jokowi attends the closing of the 2017 National Coordination Meeting of KADIN on Tuesday (3/10) (photo: PR/Jay)

President Joko Jokowi Widodo considered that issue concerning the decline in purchasing power of the public recently is deliberately conveyed by politicians for the sake of the 2019 political interests, which is a year away. However, as a matter of fact, the issue is groundless. “That is what politicians do, they raise the issues for 2019. Let us just be honest, the 2019 political year is a year away,” President Jokowi said in his speech at the closing of the 2017 National Coordination Meeting (RAKORNAS) of the Indonesian Chamber of Commerce and Industry (KADIN), at the Ritz Carlton Hotel, Jakarta (3/10) evening.

What is actually happening, according to the President, is a shift from offline to online market. Many people do not see it. The President showed the data that courier services rose by 130 percent at the end of this September. “Where does this figure come from? Yes, we conduct a thorough check with DHL, JNE, Post Office. I’m a field person, no need to argue,” the President firmly said.

Next, growth of tax revenue. Industry rose by 16.63 percent compared to last year. Trade rose by 18.7 percent. Mining, exports have started to recover, rose by 30.1 percent. “It’s up to you to believe it or not, but I obtain this figure,” the President said.

The President continued to explain that agriculture sector rose by 23 percent over the past year. Meanwhile, the construction is only 2.4 percent. “Why it fell? Thats because I already lowered the final tax from 5 to 2.5 percent,” the President explained.

If counting from big online stores, such as BukaLapak, Blibli, or Matahari.com, the President admitted, it cannot be seen because Instagram is used for sale now in Indonesia.

The President mentioned that individuals are now selling products via Instagram, Facebook by posting pictures. Therefore, according to the President, this figure cannot be traced properly. In order to track, it can be carried out through courier service.

At the beginning of his speech, President Jokowi said that actually the figures are clear. Trust is already there. An example of investment grade is clear, such as Moody’s, First rating, Standard and Poor’s.