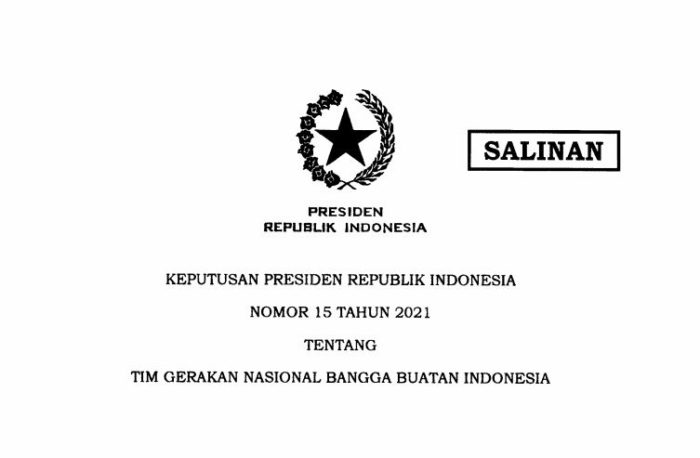 The “Proud of Indonesian Products” National Movement (Gernas BBI) was launched by the Government on May 14 last year aimed to strengthen national economic growth through empowerment of micro, small and medium enterprises (MSMEs) and small and medium industries (IKM).

“The implementation of the Gernas BBI requires support in the forms of data collection, training, access to capital, market expansion, implementation of campaigns, budgeting, and economic stimulus,” the Decree, which can be accessed on the JDIH website of the Cabinet Secretariat, states.

The Gernas BBI Team is under the authority of, and is responsible to, the President. Article 3 of the Decree stipulates that the tasks of the team are as follows:

First, carrying out activities to achieve the Gernas BBI goals, including increasing the number of MSMEs/IKM and creative economy businesses in the digital ecosystem; increasing the number of sales or purchases of local products; increasing people’s purchasing power, expanding markets, accessing capital, training, collecting data, and accelerating local economic cycles through local product spending; and providing economic stimulus for MSMEs/IKMs and creative economy businesses of the Gernas BBI in accordance with the provisions of laws and regulations.

Third, monitoring and evaluating the goals achievement of the Gernas BBI.

Fourth, reporting data on the development of the Gernas BBI.

“The membership of Governor of Bank Indonesia and Chairperson of the Board of Commissioners of the Financial Services Authority in the Gernas BBI Team does not reduce the authority and independence of the implementation of the duties and functions of central bank Bank Indonesia and the Financial Services Authority in accordance with the provisions of laws and regulations,” Article 9 of the Decree reads.

The Decree further stipulates that the Gernas BBI Team in carrying out its duties may involve other Ministries/Agencies, regional governments, associations, industry, professional organizations, academia, and media.

“The Chairperson of the BBI Gernas Team shall report the implementation of its duties to the President not less than once in every six months or at any time if deemed necessary,” the closing provision in the Presidential Decree reads. The Decree comes into force as of the date of its issuance. (UN) (RI/MUR)