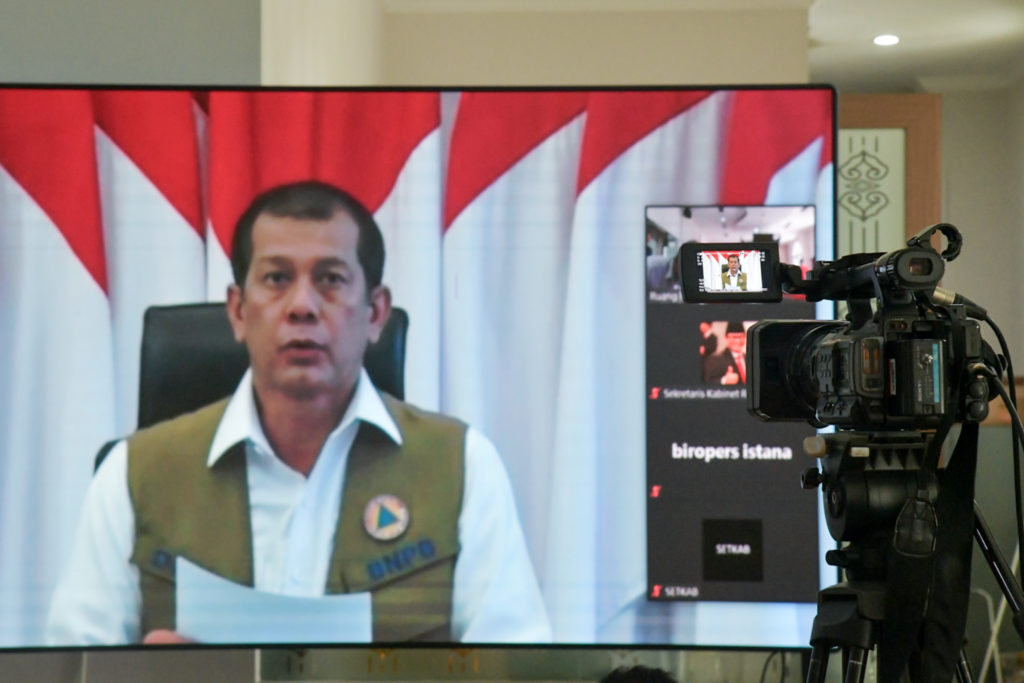 Head of the BNPB delivers a statement after joining a limited meeting through video conference from the Merdeka Palace, Jakarta, Monday (6/4). (Photo by: Ibrahim/PR)

Head of the National Disaster Mitigation Agency (BNPB) Doni Monardo – who is also Chairperson of the COVID-19 Task Force – delivered the President’s directives as follows:

First, imposition of large-scale social restrictions. According to Doni, the President has stressed the importance of the restrictions to be technically and properly regulated so there are no differences in views between the Central Government and regional governments.

A number of health protocols are also being prepared as a reference for the regions in implementing the restrictions, he added.

“It is hoped that there are no differences in implementing the restrictions between one region and the other, and measures taken in the regions will not contradict measures taken national policies, including access to activities of the people by paying attention to social distancing and physical distancing practices,” he said.

In some cases, Doni further continued, there is likely to be law enforcement from the authorities in the form of disciplinary approaches.

“Collective awareness approach aims to raise people’s awareness on why the Government is taking several measures to limit their activities,” he said.

Second, the President also called on the Task Force and Ministry of Health to improve the ability of rapid tests.

“We realize that it is not easy to find devices associated with rapid tests amidst the rising number of countries affected worldwide,” he said, adding that the President reiterated a priority for those should be given a rapid test.

“Doctors, nurses and their families as well as people directly or potentially affected from COVID-19 are the priorities,” Doni said.

Third, the President called for improved capability of laboratories in conducting examinations, be it by means of the PCR (Polymerase Chain Reaction) tests or other techniques.

“We invited Head of Eijkman Institute for Microbiology a few days ago to receive Rp14 billion in funds to immediately improve its ability to conduct examinations,” he added.

Fourth, regarding PPE (personal protective equipment). Doni said that PPE are not only our domestic issue but also a global issue today.

According to him, it is hoped that Indonesia will be able to produce PPE with local raw materials that have been certified by the World Health Organization (WHO) so the country will no longer depend on other countries to get PPE raw materials.

“To date, the Task Force has received 570,000 PPE and has distributed 390,000 PPE to all regions across the country. We also received 105,000 PPE this afternoon and these will soon be our priority to be distributed to hospitals in the affected regions,” he said.

Fifth, the Government called on the media to control and oversee the distribution process of PPE to all hospitals, including those which do not handle COVID-19 cases.

“It appears that there are doctors who are exposed even to death, including dentists and ear, nose, and throat (ENT) doctors,” he added.

Therefore, Doni asserted that PPE procurement is a priority not only for doctors at the forefront of treating COVID-19 patients, but for all doctors as it turns out that asymptomatic patients can also become virus carriers and the Indonesian Medical Association (IDI) has reminded the public to remain cautious.

Next, regarding the use of masks. Doni said that the President has ordered the use of face masks in accordance with the WHO health protocols.

“Earlier the WHO suggests that only the sick should wear face masks but now it appeals to everyone to wear face masks, particularly when they are in public places,” he said, adding that medical masks are only for doctors, nurses and those at the forefront.

Other than medical works, face masks made of fabric and other materials will also work, he added.

Sixth, regarding Indonesian migrant workers, Indonesian crew members of cruise ship, Jama’ah Tablig congregations. Doni said that the President has called for synergy between the Central Government and regional governments in collecting data and monitoring self-isolation for those who just arrived from various regions, particularly from abroad.

“Such as cases in Bali, Riau, Riau Islands, West Kalimantan and North Kalimantan provinces,” he said.

Meanwhile, to reduce the number of patients to the hospitals, Doni said that there are around 15 million telemedicine customers registered.

“We also hope that this telemedicine program can become a national priority program so once the people experience medical and psychological issues, they can receive online treatment by contacting several health service platforms, such as Halodoc, Allodokter, SehatQ, Klikdokter, YesDok, DokterSehat, SehatPedia, Maudok, and others. This is of particular importance because we do not only provide assistance to the people with medical issues but also those with psychological issues,” he said.

“If we can deal with psychological issue, then our nation’s immunity will be strong in the fight against COVID-19,” Doni added. (FID/EN)