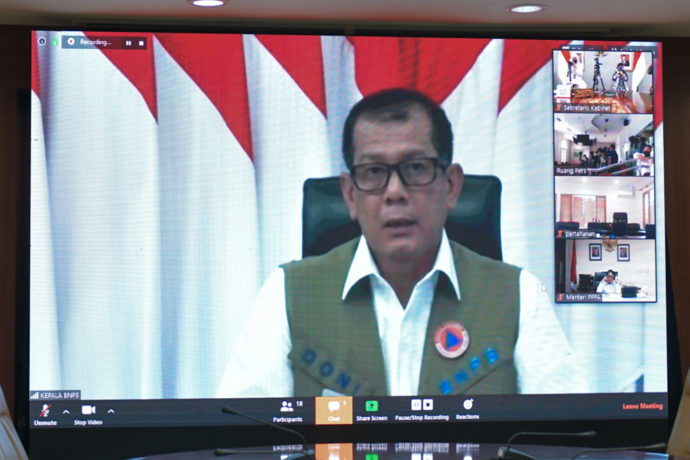 Head of the National Disaster Management Agency (BNPB) Doni Monardo, who is also Chairperson of the COVID-19 Task Force, delivers statement in an online press conference on Monday (13/4). (Photo by: PR/Ibrahim).

Head of the National Disaster Management Agency (BNPB) Doni Monardo, who is also Chairperson of the the COVID-19 Task Force, said that the President’s directives are as follows:

First, the President has ordered that data from the regions should be entirely transparent and the COVID-19 Task Force has requested for data from regional task forces to ensure that the data is integrated.

Second, the President has ordered the increase in the capacity of the Polymerase Chain Reaction (PCR) test.

The test, the President said, is very important to find the people who have tested positive for the virus and to determine further measures, including self-quarantine or medical treatment.

According to Doni, Minister of Research and Technology/Head of the National Research and Innovation Agency has supported the Eijkman Institute to conduct more examination.

Third, the President has praised communities in several regions that have worked hand in hand amidst the ongoing outbreak, citing an example of communities that provide assistance for the people who are in self-quarantine process.

“The President expressed hope that people in other regions can follow suit,” Doni said.

Self-discipline, according to Doni, should be supported by communities, adding that the communities should remind its members to obey the large-scale social restrictions policies.

“The President has reminded his Cabinet Ministers on the importance of campaigning for physical distancing, wearing face masks, washing hands, and avoiding touching eyes, nose and mouth,” Doni said.

Fifth, the President has ordered several Ministers to boost efforts to break the chain of the virus transmission.

From the available data, Doni said, most of the transmissions do not occurr from people who are sick and treated in hospitals or people in self-quarantine, but from asymptomatic persons (OTG).

“Asymptomatic person are those with COVID-19 who have not been tested but they travel to various areas and infect other groups,” he said.

Other groups that are very vulnerable to COVID-19, Doni added, are the elderly and those with chronic disease or comorbidities, including hypertension, heart disease, diabetes, cancer, tumors asthma and other diseases.

“Young people who have potential for COVID-19 should avoid the vulnerable groups,” Doni explained.

Sixth, the President also highlighted the importance of priority for hospital services for those are seriously ill and in critical condition.

“People with mild or moderate symptom can do self-quarantine at home or in available places such as the Wisma Atket,” he said.

Seventh, the President highlighted the importance of telemedicine.

Minister of Health, according to Doni, has reported to the President that there are more than 3,000 telemedicine patients, 30 of whom tested positive for the virus.

“And of those 30 people, only 2 people were referred to the hospital. Doctors play a pivotal role so they can reduce the number of patients coming to the hospital,” he said.

Eighth, the President has instructed Minister of Maritime Affairs and Fisheries to provide fish supply to communities in various regions to increase their immune system.

Ninth, the President expressed the highest gratitude to doctors, nurses, and other health workers.

“There is a shortage of doctors in several medical facilities that handle many patients. To address this problem, registration letters and training will be provided for 2,935 doctors,” Doni said, adding that Minister of Health will give priority to doctors so they can provide treatments for the patients.

“The doctors will be supported by 18,000 volunteers, including doctors, nurses and laboratory personnel,” he explained.

Tenth, the President highlighted the importance of anticipating drought.

“The Food and Agriculture Organization (FAO) has announced that a food crisis is looming this year due to two factors, namely the COVID-19 outbreak and drought. We must improve our national food security and our import dependence must be eliminated immediately,” Doni said.

Eleventh, the President has instructed the people who have returned to their hometown to conduct self-quarantine to avoid virus transmission in the regions.

Thirteenth, the President has ordered immediate implementation of Pre-Employment Card and the social safety net program, including the distribution of staple food.

The President, Doni added, has ordered that food supply should also be provided for Indonesian workers in Malaysia

Fourteenth, the President has instructed the National Police Chief to provide assistance for the people who come from outside Jakarta and have not received the social assistance.

Fifteenth, the President called on the people not to reject the funeral (of those with COVID-19) because the funeral is conducted in accordance with health protocols,” he said.

“We need support from community leaders in the regions,” Doni concluded. (FID/EN)