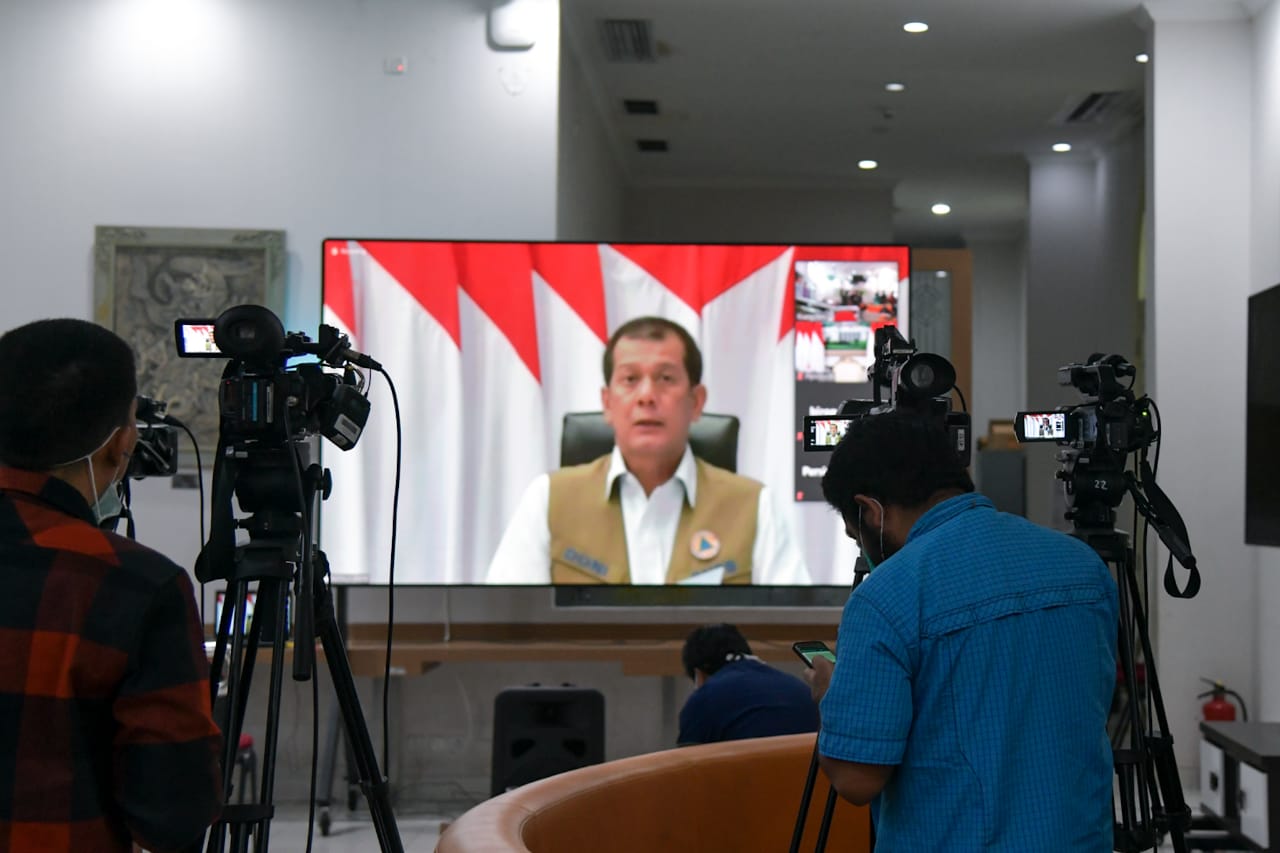 Head of the National Disaster Management Agency (BNPB) delivers his remarks after an online Limited Cabinet Meeting on Report of the COVID-19 Task Force on Monday (30/3) at the Bogor Presidential Palace, West Java. Photo by: PR/Ibrahim

Head of the National Disaster Management Agency (BNPB) Doni Monardo, who is also Chairperson of the the COVID-19 Task Force, said that the President’s directives are as follows:

First, the Government stipulates a large-scale social restriction policy. The legal bases for the policy are Law Number 24 of 2007 on Disasters, Law Number 6 of 2018 on Health, and Law Number 23 of 1959 on Emergency Situation.

“The Government will not implement measures taken by several countries which were ineffective and create new problems,” Doni said, adding that disaster management policies should not generate new problems.

Second, the President has issued further directives on re-allocation and re-focusing of the State Budget and regional budges. The priority of the Budget is the people affected by the COVID-19 outbreak.

Third, regarding the limited facilities, especially virus test kits, the President has authorized the private sector to conduct PCR (Polymerase Chain Reaction) tests under the coordination of Ministry of State-Owned Enterprises.

“Minister of State-Owned Enterprise will further decide which private company is allowed to participate in the PCR test,” Doni added.

Considering the limitations of laboratories and research institutions in several regions, Doni added, the involvement of the private sector will accelerate the test. He also said that the test procedures should follow the SOP and standards set by Ministry of Health.

Fourth, issues on mudik (annual exodus ahead of Eid Al-Fitr) have been discussed in details with the Governors.

Fifth, the Government guarantees the availability of basic needs and health equipment for communities, including face masks, hand sanitizers, and disinfectants.

“Regarding PPE (personal protective equipment), Minister of Industry has reported to the President that there are 28 textile companies that will be able to produce PPE even though most of the raw materials are imported,” Doni said.

Sixth, the Government will prioritize domestic needs and the Task Force has distributed approximately 165,000 PPE units to regions across the country, especially in capital Jakarta.

“Today, if there are no obstacles, another 100,000 PPE units will arrive from the same textile companies,” he said, adding that based on the results of coordination with the Ministers, there was an agreement that Indonesia has the right and priority to meet its domestic needs.

Seventh, the President called on the people in villages to establish community meal centers to serve the people who have returned to their hometowns.

Doni further said that the COVID-19 Task Force measures are based on community-based penta-helix collaboration.

All stakeholders, he added, should remain united to implement the measures. The people awareness is also  pivotal in combatting the outbreak, he added. (TGH/FID/EN)