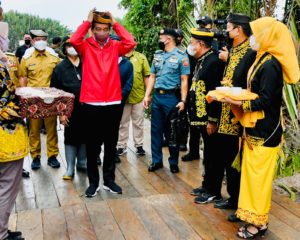 Tribal chief of Tidung Armansyah Ali along with tribal chief of Brusu Hendrik were seen welcoming President Jokowi after getting off the speedboat that carried him and his entourage.

On the welcoming ceremony, the tribal chief sang and recited shalawat (a chant praising Prophet Muhammad), splashed water, and gave a traditional headband called sesingal tidung to the President.

For the record, in local language, people called the ceremony as timug bensaluy.

“Timug means water, bensaluy means a thing that makes something colder. Yellow rice is a symbol of majesty in Kalimantan as an expression of gratitude to comers,” Armansyah said.