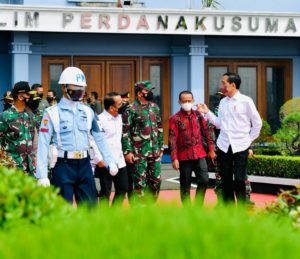 President Jokowi is on his way to Papua province for a working visit, Thursday (01/10). (Photo by: BPMI/Laily)

The President and his entourage took off from Halim Perdanakusuma Air Force Base, Jakarta, at around 09.20 Western Indonesian Time using the Indonesia-1 Presidential Aircraft.

Upon arrival at Sentani Airport, Jayapura regency, President Jokowi and his entourage will immediately spend the night and continue their work agenda the next day.

During the working visit, the President is scheduled to open the 20th National Games (PON) as well as to inaugurate several infrastructures.

Also accompanying the President on the flight to Papua province were: Minister of Investment/Head of the Investment Coordinating Board Bahlil Lahadalia, Commander of the Indonesian National Defense Forces (TNI) Marshal Hadi Tjahjanto, and Special Staffer to the President Billy Mambrasar. (BPMI) (FI/MMB)