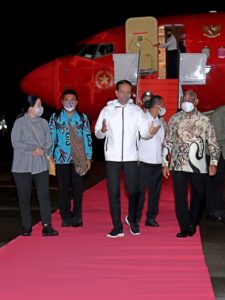 Afterwards, the President is scheduled to inspect the COVID-19 vaccination for students, general public, and the elderly at the Special Raider Battalion 762/VYS Building, East Sorong district, Sorong city.

The President is also scheduled to give directives to the Regional Leadership Communication Forum (Forkopimda) throughout West Papua province held at the Sorong Mayor’s Office.

In the afternoon, the President and his limited entourage will head to Domine Eduard Osok International Airport, Sorong city, to head back to Jakarta.

For the record, in a series of his working visit, President Jokowi has been in Papua province since Friday (01/10). On Saturday (02/10), the President inspected and inaugurated several sporting event venues to be used for the 20th National Games (PON) 2021 at Papua Bangkit (Papua Rises Up) Stadium, Jayapura regency.

On Sunday (03/10), the Head of State inaugurated the Mopah’s airport new terminal and the Sota Integrated Cross Border POst (PLBN) as well as inspected the Sota Market in Merauke regency.

During his working visit, the President also inaugurated General L.B. Moerdani Hospital in Margamulya district. In addition, the Head of State also inspected the COVID-19 vaccination drive for the general public and students held at the Regent’s Office yard, Merauke regency.