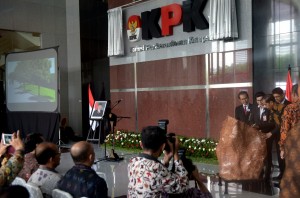 The 16-story building which was constructed on the 8,663 square meters area has secure, smart, and green concepts. The building was constructed since 29 November 2013 by using as much as Rp 315.15 billion multiyear budget of the State Budget (APBN).

President Jokowi in his remarks hopes KPKs new building as well as its new leaders could bring new spirit that never worn out and a momentum to eradicate corruption in the Country. The new spirit could move us all to fight against corruption, the President said.

The President asserted that new spirit only is not enough. The spirit must be supported by a strong institutional capacity and strong human resources competency. Moreover, the President added, KPK is currently facing harder challenges, not only because there are more cases that need to be handled, or the complexity of the cases, but KPK also faces publics high expectation on their performance.

The challenges can be faced by strengthening the institutional capacity and human resources competency, along with improving supporting facilities and infrastructures, President Jokowi said.

In the remarks, President Jokowi reaffirmed his support and hope to KPK. The President said that he, like any other people, has great expectation on KPK to materialize a clean governance and a corruption-free country.

We all need to fight against corruption. It is for the sake of all Indonesian people. Indonesia could rise and become a great country if we are free from corruption, President firmly said.

Therefore, President Jokowi added, the Government is committed to strengthening KPKs institutional and capacity in order to meet peoples expectations.

The President mentioned that in previous years, KPK has successfully gained public trust. It is surely should be appreciated and something that we must be grateful for. The public trust, President Jokowi added, should be maintained and increased by keep working more professionally, intensively, and continously, in order to maintain the institutions competence.

President Jokowi hopes the new leaders of KPK can increase public trust in the corruption eradicating agenda. The President believes that KPK as an institution has run smoothly so that the KPK leaders succession shall not affect the performance of KPK.

KPK must be maintained as an independent institution which is free from the influence of political power. The independency of KPK must be supported by professional, credible, transparent, and accountable legal acts, President Jokowi firmly said.

President Jokowi asserted his support to KPKs leaders and staffs to keep working in accordance to the authority mandated by the people through the Law.

Corruption eradication must not stop. I hope KPKs new leaders could work in the new building soon with new spirit, the President said.