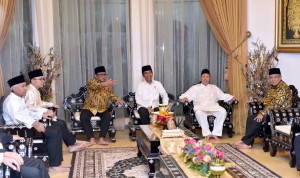 President Jokowi is engaged in a conversation with Speaker of the Regional Representatives Council Oesman Sapta and the 9th Indonesian Vice President Hamzah Haz during iftar dinner in Jakarta, Wednesday (15/5). Photo by: Presidential Secretariat.

President Joko Jokowi” Widodo has said that he trusts the General Elections Commission (KPU) as the only institution that has authority to count and announce the Election results.

“Let the KPU decide (the Election results) because the KPU has the authority (over the Elections),” President Jokowi told journalists after attending iftar dinner with Speaker of the Regional Representatives Council (DPD) in Jakarta, Wednesday (15/5).

The President added that he will obey all mechanism and rules stipulated by the Constitution, Laws, and the KPUs Regulations, adding that the Constitution stipulates that after the KPU announces the official Election results on the upcoming 22 May 2019, the appeal to the results can be filed to the Constitutional Court (MK).