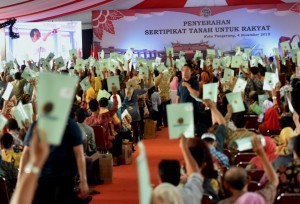 The Government accelerates the process of land certification to eliminate land dispute, according to President Joko Jokowi Widodo.

According to the President, land dispute can easily lead into conflict and land certificate will prevent such dispute since the name and address of legal holder of the land is clearly written.

“The name and the address are there. If you hold legal evidence of your land, there will be no land dispute,” President Jokowi further said, adding that he also reminded the land certificate holder to keep their certificate well by covering it with plastic.

Also present during the event were Minister of Agrarian and Spatial Planning/ Head of the National Land Agency (BPN) Sofyan Djalil, Minister of Industry Airlangga Hartarto, and Governor of Banten Wahidin Halim.