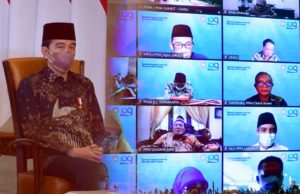 President Joko “Jokowi” Widodo expressed appreciation to Indonesia’s second-largest Muslim organization Muhammadiyah for the contribution it has given to COVID-19 pandemic management measures in the country.

“The Government appreciates the contribution and consistency of Muhammadiyah in pandemic management,” the President said in his opening remarks at Muhammadiyah’s 109th anniversary event held online, Thursday (18/11), from the State Palace in Jakarta.

According to the President, since the onset of the pandemic, Muhammadiyah has moved swiftly to use all of its business’ charitable potential in an organized manner and carry out humanitarian work sincerely and wholeheartedly.

“Muhammadiyah has set an example of social piety: optimizing the utilization of more than 117 hospitals and 63 higher education institutions of Muhammadiyah and its women’s wing, Aisyiyah, to help those exposed to COVID19; assisting, strengthening, and enlightening the people; carrying out medical measures and promoting health protocols,” he said.

The Head of State also expressed gratitude for the hard work and cooperation of all components of the nation because it has succeeded to curb COVID-19 transmission, so the people can slowly carry out activities and productive businesses can resume operation.

“We must be grateful that international communities laud COVID-19 pandemic management in Indonesia,” he said while underscoring the importance of being vigilant to avoid increasing number of COVID-19 cases.

On that occasion, the President who was accompanied by Coordinating Minister for Human Development and Cultural Affairs Muhadjir Effendy and Minister of State Secretariat Pratikno also congratulated Muhammadiyah Organization for its 109th anniversary.

The President added that history has recorded that Muhammadiyah Organization is committed to instilling its core values to strengthen progressive Muslims as the key to achieving the dignity of perfect people.

“The core values of progressive Islam and “middle-path” (Wasatiyah) Islam have become the foundation of religious moderation to make Indonesia the biggest Muslim population country that is safe and democratic,” he remarked. (DND/UN) (DH/MUR)