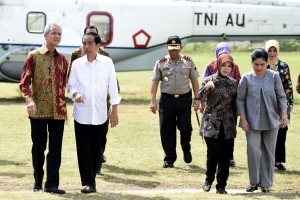 The program aims to alleviate poverty and improve the standard of living of small entrepreneurs in rural areas by providing opportunities for farmers and fishermen to work or do business properly, Ari said.

The program that aims to provide opportunities for farmers and fishermen to work or do business properly covers the land certification program or land program for the farmers through the Ministry of Agrarian and Spatial Planning/ National Land Agency, Ministry of State-owned Enterprises, and State-owned Banks.

Other programs, Ari added, is the Synergy between Smallholder Business Credit (KUR) Program and Inclusion Program or deepening of financial markets.

The program which is a form of synergy among Financial Services Authority (OJK), Bank Indonesia (BI), and Ministry of Cooperatives and Small and Medium Enterprises, as well as banking sector aims to make financial service in rural areas accessible for the entrepreneurs, Ari explained.

The program provides an ease of doing business for entrepreneurs in regions because they do not need to disburse credit in the banks located in town, but via distributor which is called smart agent, as an extension of banking in the regions.

Meanwhile, the synergy on production sectors includes facilities and infrastructure, seed, fertilizer, and educator will involve a synergy of two ministries, namely the Ministry of Agriculture and Ministry of Public Works and Public Housing.

In the marketing, Ari added, the Government will also introduce an online-based marketing system products (e-commerce) for agricultural through the development of IT infrastructure in an effort to cut production distribution chain from the farmer to the consumer.

It aims to maintain the availability of food commodities and to maintain price stability for the consumers, Ari explained.

Limakilo.id, kumis.com are the examples of e-commerce apps which provide marketplace information. The synergy in marketing involved three ministries, namely Ministry of Communication and Informatics, Ministry of Trade, and Ministry of  Cooperatives and Small and Medium Enterprises.

In the distribution cycle, farmers need warehouse to keep their products, they also need market and couriers. Moreover, transportation in rural areas will become the core that drives the economy of rural communities.

Ari explained that there are several reasons to choose Brebes as the location for pilot project of poverty alleviation. First, because Brebes is Indonesias production center of shallot which is the commodity that has great contribution to the national inflation. However, the welfare of shallot farmers in Brebes is relatively low, because most of the profits is gained by the middleman.

By launching the program, the welfare of shallot farmers is expected to increase and could become a good example for other entrepreneurs in other regions, Ari said.