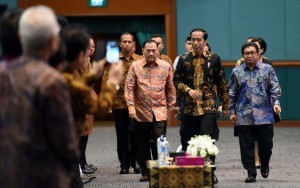 President Jokowi, accompanied by OJK Head and Governor of Bank Indonesia, enters the room where the commemoration of the World Savings Day is held at the JCC, Jakarta, Monday (31/10). (Photo by: Public Relations Division/Jay)

Many Indonesians still keep their money under the pillow or under the bed, and even some still save more than Rp1 trillion through those ways, President Joko Jokowi Widodo said.

This is something that we have to change. We have to persuade people to start saving their money in banks, the President said during the Ayo Menabung (Lets Save) campaign as part of the commemoration of the World Savings Day held at the Jakarta Convention Center (JCC) on Monday (31/10).

The ratio of savings to Indonesias Gross Domestic Product (GDP) is currently still very low, which is around 20 percent. Ideally, the President said, it should be 32%. The ownership percentage of bank accounts in Indonesia is still only 19% of the total Indonesian population who are above 15 years old, the President said.

All students must have the habit of saving money, although its only Rp1,000 or Rp5,000. Start saving. You can use your saving for pursuing your study to a higher level, the President said, adding that students and university students can also save their money in the forms of investment fund, stocks, gold, and the like.