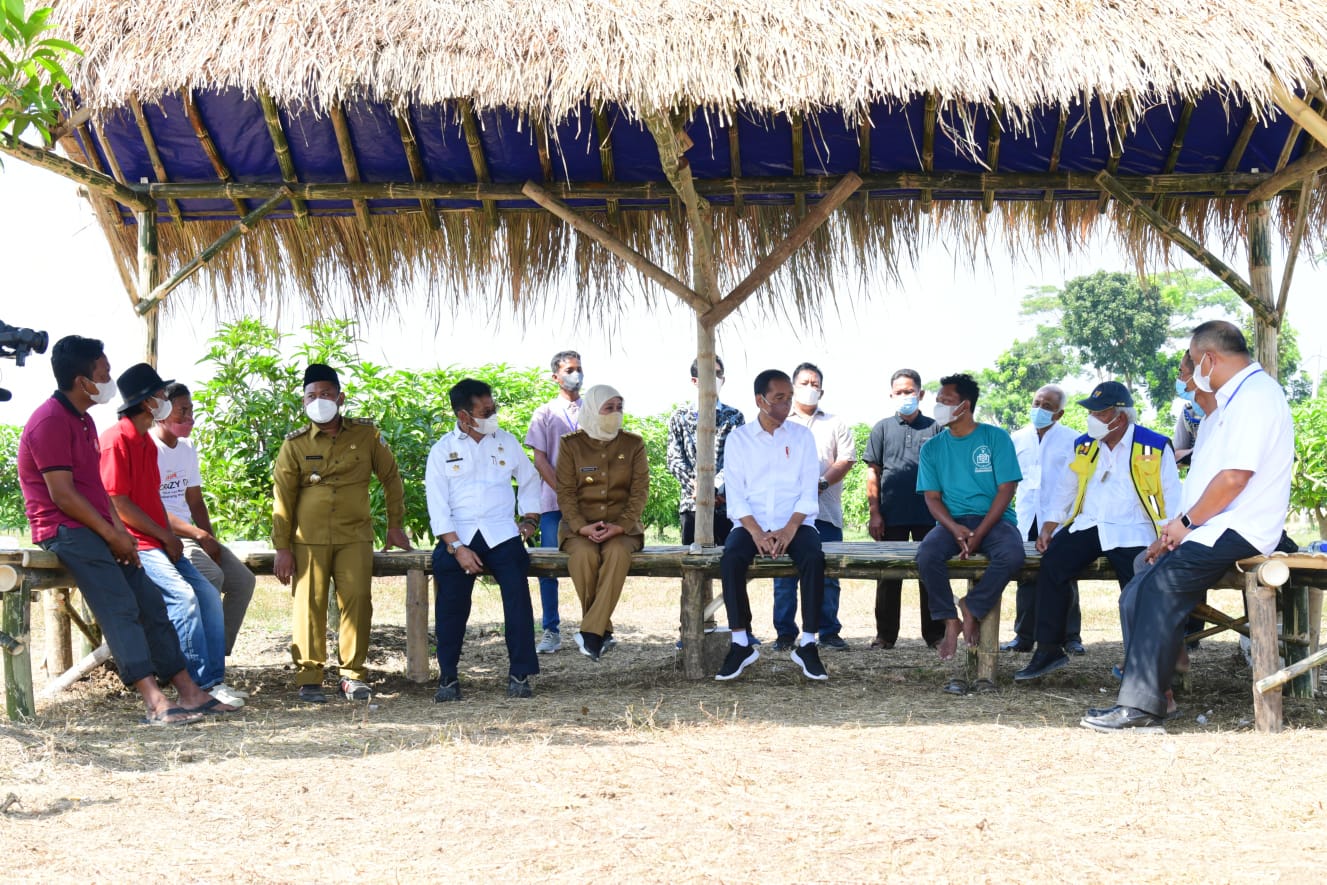 President Jokowi engages in a dialogue with farmers at the inauguration of food estate and Taksi Alsintan in Gresik regency, East Java province, Monday (08/22). (Photo by: BPMI of Presidential Secretariat/Muchlis Jr)

The President expressed hope that the food estate planted with mangoes could be integrated with an irrigation system in order to boost the agency’s agriculture productivity in the regency.

“Today I am in Gresik regency to plant mangoes in an area of approximately 1,000 hectares in four sub-districts. We hope the food estate that is run by both the public and private sectors can be integrated with the retention basin that has been built here. There is a retention basin. There is a food estate, so the people can benefit from them and private sectors can also contribute,” he said.

According to the President, mangoes in the food estate can be harvested in three years to fulfill demands for both domestic and export markets, adding that similar food estates will be developed in other regions as well.

“I suppose there are high demands from the Middle East, China, Japan, and Europe, so we began [planting]. Moving forward, it will also be developed in other regencies that have marginal lands appropriate to plant mangoes,” he said, while urging that the food estate be well-managed and have a good quality control.

“I am glad. Based on what I see of what has been planted here, the management is excellent and we hope there will be QC (quality control) supervision from the buyers so the level of quality will increase,” he said.

On that occasion, the Head of State also launched the Taksi Alsintan program to provide agriculture products to farmers and boost economic recovery in the agriculture sector.

For the record, the Taksi Alsintan is an agricultural equipment and machinery provision program carried out independently by business actors in the agriculture sector using People’s Business Credit financing scheme with an interest subsidy from the Government.

“There will be one owner, such as UD Pesanggrahan, UD Dwi Putra Raya, or other business entities. They have agricultural equipment and machinery and they rent it to farmers,” he said, adding that the Taksi Alsintan program will benefit farmers.

“I suppose if it is supported by low interest rates, which we subsidize, and down payment—we are still formulating this one, I think many farmers in many regions, villages, provinces, and regencies will want to buy agricultural equipment and machinery, including rich milling units (RMU), dryers, combine harvesters, and tractors with the Taksi Alsintan program,” he said.

The President also expressed optimism that the use of modern agricultural equipment such as combine harvesters and RMUs can boost farmers’ productivity as they can minimize food loss in production.

“If we want to be productive, we can reduce food loss in every production because our food loss is very high, 12-13 percent,” he remarked. (FID/UN) (DH/EP)