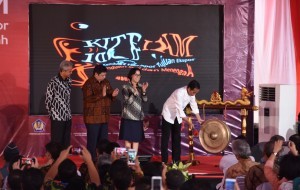 President Joko Jokowi Widodo has launched a policy of an Export-purposed Import Facility for Small and Medium Industries (KITE IKM), at Tumang Copper Crafts Center, Cepogo Subdistrict, Boyolali Regency, Monday (30/1) afternoon. It is expected that through the policy, the production costs for Small and Medium Enterprises (SMEs) at least can be lowered. “The Minister of Finance has told us that the presence of KITE IKM can reduce the cost approximately up to 25 percent. First, we can buy the raw materials directly. Second, the cost of import tax is eliminated. Third, import duty is also eliminated,” the President said.

If the KITE facilities are used by SMEs, the President further continued, it would be very beneficial. “What does it mean? Our competitiveness will be good,” the President said.

President Jokowi believes that small and medium business players can actually be encouraged to compete with other countries. Given the strength of Indonesias economy is on the art sector. However, the President acknowledged that it should be supported by better designs, ones that can go international. “I was whispering to the Minister of Industry to be able to look for the designers, those from Tumang first, then maybe from Italy or France. So the design is not monotonous, every year the design can change,” the President said.

President Jokowi admitted that handling SMEs takes extra efforts but fairness is a must. “The big ones have been able to handle themselves but small, medium ones are also taken care of so they can be big enterprises as well. It is the task of the Government,” the President said.

From the beginning until now, the President further added, the problem is actually clear. If we asked businessmen, we can find out their needs and difficulties. It is whether the Government would resolve it or not that matters. “If we want to resolve it, let us ask the businessmen so that we can find out what the problems are and what the solutions to the problems. It was the tasks of the Government, banking, institutions, customs and excise,” the President said.