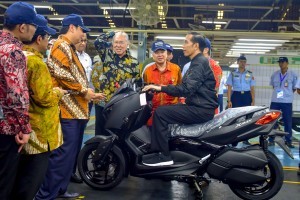 President Jokowi also praised the PT. YIMMs export that now reached 338,000 motorbikes, with 94 percent local content on each motorbike, whereas in 2014, PT. YIMM only exported 23,000 motorbikes.

These are the kinds of investments we are looking for, because if we export goods but the raw materials are using the imported ones, it will cause trade balance deficit, President Jokowi said in his speech.

For the record, 25 percent of the motorbike production will be exported to 45 countries and the rest 75 percent will be sold on domestic market.

The President also expressed his appreciation for what has been done by PT. YIMM. It has been 44 years. Yamaha has become an old friend in Indonesia business world, he added.