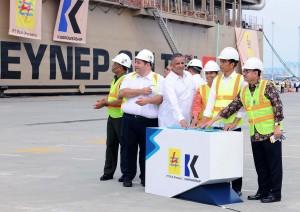 According to the President, the procurement of this Marine Vessel power plant was part of the Governments efforts to overcome the shortage of electricity supply, electricity crisis and blackout in several regions in Indonesia.

The President added that in total, the Government had ordered five similar ships and one had been completed.

He also hoped that in the next six months, the other four ships would arrive.

Were going to operate the ships mostly in the eastern part of Indonesia, including North Sulawesi, Maluku, and East Nusa Tenggara. One ship will be operated in North Sumatera.  Our country is an archipelago that consists of 17,000 islands. So, I think these power ships that can be mobile, moving from one island to another, is appropriate for Indonesia, the President said to reporters.

President Jokowi also said that he had met with Turkish Prime Minister Erdogan and with the owner of Karpowership to discuss the plan to build the ships, after the entire five ships are completed, in Indonesia.

We will need more ships like these. I also told the owner of the company manufacturing the ship that later on they could manufacture the ships in Indonesia. They will probably cooperate with state-owned enterprises or private companies in Indonesia, the President said, adding that workers to be employed are certainly from Indonesia, which in this case, from state-owned electricity company PT. PLN.

In the meantime, President Director of state-owned electricity company PT. PLN Sofyan Basyir said that the ships were purchased to meet the needs of electricity as part of the 35,000 mega watt program in the next 3-5 years.

The first ship that arrived, Karadeniz Powership Zeynep, has the capacity of 120 MW and will be operated in Amurang, North Sulawesi, Sofyan said.

He added that in Amurang, the ship would supply electricity in North Sumatera and  Gorontalo through the electrical voltage of 150 KV so it is expected that electricity shortage in the two provinces could be tackled and residents who have not been able to enjoy electricity could be immediately served.

The operation of those ships will cease in July 2016.