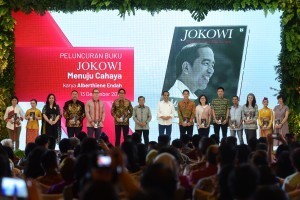 President Joko Jokowi Widodo said that he once served the country as a Mayor and as a Governor before taking office as the President, acknowledging that he cannot please every single people.

This means that some people are unhappy. It can be reproachful, it can berate, President Jokowi said while attending the book launch of Jokowi Menuju Cahaya by Alberthiene Endah, at Hotel Mulia Ballrom, Senayan, Jakarta, Thursday (12/13).

Although sad, the President acknowledged that a leader in any level would get berated, criticized, and blasphemed yet he sometimes think, is this Indonesian way to deal with their disagreement with leader? Is this Indonesian manner? This is something we really need to straighten out, President Jokowi said.

Therefore, the President expressed hopes that the Indonesian people can shift their habits from being consumptive to being productive, from being negative thinking to being positive thinking. To become that, it is necessary to build human resources, who are always looking forward and thinking positive, he said.