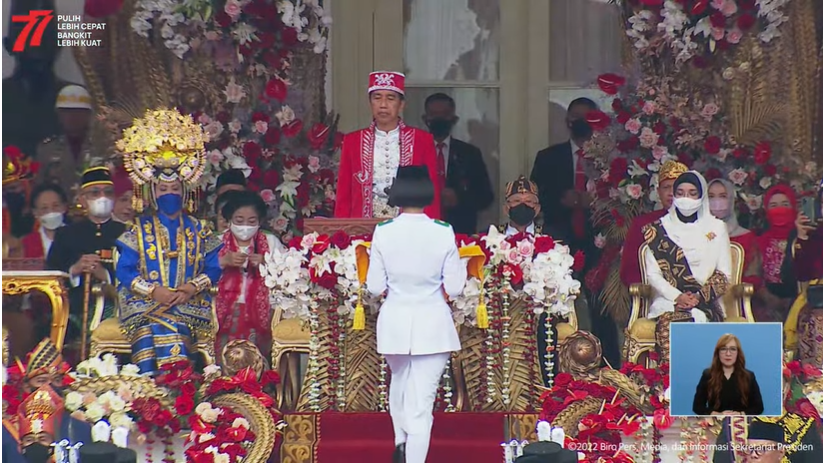 President Jokowi hands over the national flag to a flag bearer at the Commemoration Ceremony of the 77th Proclamation of Independence of the Republic of Indonesia, at the courtyard of Merdeka Palace, Jakarta, Wednesday (08/17). (Photo by: Screenshot of Presidential Secretariat Youtube Channel)

President Joko “Jokowi” Widodo Wednesday (08/17) at the courtyard of Merdeka Palace, Jakarta, presided over the ceremony to commemorate the 77th Proclamation of Independence of the Republic of Indonesia.

Prior to the ceremony, both duplicates of the national flag and the proclamation text were carried on a cultural carnival from the Independence room which is located in the upper part of National Monument (Monas) to Merdeka Palace.

The ceremony began with the firing of 17 dozen cannons, followed by the sound of sirens for one minute.

On that occasion, Speaker of the Regional Representative Council La Nyalla Mahmud Mattalitti read out the proclamation text, which was read by Indonesia’s First President Sukarno 77 years ago.

Afterward, President Jokowi as the ceremony inspector led the participants for a moment of silence, while Minister of Religion Yaqut Cholil Qoumas guided the reading of the prayer.

For the record, two years earlier, the commemoration ceremony at Merdeka Palace was only attended by a limited attendees due to the pandemic, while other invited guests attended the ceremony via video conference.

“The ceremony is based on the President’s direction since he noticed the interest, the want, and the hopes of the public to be able to physically attend the ceremony at Merdeka Palace,” Head of Presidential Secretariat’s Bureau of Protocol M. Yusuf Permana said.

“We still limit the attendees to a maximum capacity of 60 percent under strict health protocols. We do it gradually. Now, we accept 4,500 guests,” Yusuf said, adding that the palace also facilitates other invited guests to attend the ceremony virtually.

“This virtual ceremony can be attended by up to 77,000 people from Sabang-Merauke, including the diaspora community abroad,” he said. (DND/AIT/UN) (RIF/EP)