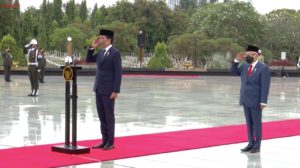 The ceremony began with a report delivered by ceremony commander Marine Colonel Danuri to the ceremony inspector, followed by giving a salute to the fallen heroes.

Afterward, the siren was sounded to commemorate the Battle of November 10, 1945 in Surabaya, followed by a moment of silence led by the ceremony inspector.

“Let’s take a moment of silence to honor the service of our nation’s heroes,” President Jokowi said.

After the President laid a wreath at a monument, Minister of Religious Affairs Yaqut Cholil Qoumas recited a prayer for the heroes.

The ceremony concluded with a final salute to the heroes, led by the ceremony commander. (MAY/AIT/UN) (RI/EP)