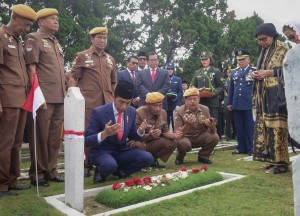 The ceremony began with paying homage to the heroes, followed by one minute of sirens and a moment of silence to recall the services of the heroes during the 10 November battle in Surabaya.

The President then laid a wreath and the event was concluded with a prayer by Minister of Religious Affairs.

Afterwards, President Jokowi sowed flowers on the grave of national heroes buried in the cemetery, such as: