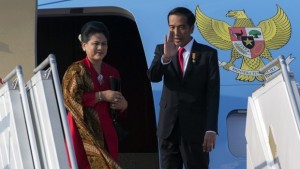 Member of Presidential Communication Team Ari Dwipayana in his press release on Monday (9/11) said that the President would begin the working visit in Surabaya by leading National Heroes Day ceremony at Tugu Pahlawan, Surabaya on Tuesday (10/11) morning.

This years commemoration was special because it was the first time national heroes day ceremony was observed in Surabaya and led by a President.

During his visit to the regions, the President always makes time to visit shipyard industries to show the seriousness of the administration of Jokowi-JK to prioritize maritime sector, Ari said.

In the afternoon, President Jokowi is slated to head to Malang to open Jenderal Sudirman Cup football tournament, which was promised by the President after watching the final football match of the President Cup between Persib and Sriwijaya FC.

On the third day, President Jokowi is scheduled to visit PT Trans Pacific Petrochemical Indotama (TPPI), where the President is slated to oversee the processing of premium gasoline in Indonesia.

By processing premium gasoline at home, it will reduce premium import by 20 percent or 61,000 barrel per day. If the price of gasoline is US$ 60 per barrel, the country can save US$ 1.9 billion per year or almost Rp 24 trillion, Ari added.

Ari further said that before returning to Jakarta, President Jokowi will also launch a special program aimed at creating jobs through synergy between investors and Islamic boarding schools in Gresik Regency. President and First Lady Ibu Iriana Joko Widodo are scheduled to return to Jakarta on Wednesday (11/11) at 5.30 pm and is scheduled to arrive in Jakarta at 6.50 pm local time. (ES) (EP/YM/Naster)