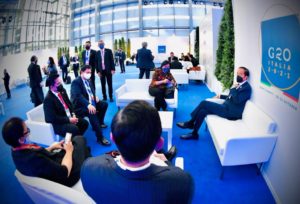 President Jokowi on Sunday (30/10) engages in conversation with Indonesian delegation on the sidelines of the G20 Rome Summit in Italy. (Photo by: Presidential Secretariat/Laily Rachev)

President Joko “Jokowi” Widodo and his entourage on Sunday (31/10) departed from Italy to the Scottish city of Glasgow to join the World Leaders Summit of the United Nations Climate Change Conference (COP26).

In Glasgow, the President is scheduled to attend several high-level meetings, including the COP26 World Leaders Summit on 1-2 November 2021.

For the record, during his visit to Rome previously, the President attended several high-level meetings, including sessions of the G20 Summit and bilateral meetings with country leaders and international organizations.

On the first day, the President was present at the G20 Summit session on the global economy and health. He was also one of the keynote speakers at the side event of the G20 Summit which discussed MSMEs and women-owned businesses.

On the second day, President Jokowi addressed the G20 Summit session, which discussed climate change, energy, and the environment, as well as a session on sustainable development,

In addition, the President also held bilateral meetings with leaders from Australia, France, Turkey, India, the European Council as well as a meeting with the World Bank.

During the closing of the G20 Summit, President Jokowi officially received the G20 presidency from Italian PM Mario Draghi and invited leaders to attend the next G20 Summit slated to be held in Bali on 30-31 October 2022. (Presidential Secretariat/UN) (FI/EP)