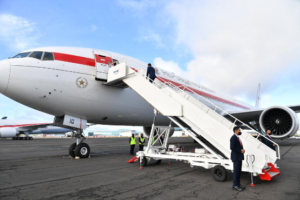 President Joko “Jokowi” Widodo and his entourage on Tuesday (02/11) at around 11.20 local time, departed from Glasgow Prestwick International Airport to Abu Dhabi, the United Arab Emirates for his bilateral visit after attending the COP26 World Leaders Summit series on 1-2 November 2021.

President Jokowi had a tight schedule during two days visit in Glasgow.

On the first day, the President held a business meeting with CEOs of British companies. The meeting is expected to accelerate the realization of the investment commitment of companies attending the meeting worth US$9.29 billion to support the acceleration of energy transition and green economy in Indonesia.

The President also attended the opening ceremony of the COP26 World Leaders Summit held at the Scottish Event Campus (SEC).

President Jokowi reiterated Indonesia’s commitment in dealing with climate change, including a significant drop in the deforestation rate in the past 20 years as well as forest fires by 82 percent in 2020.

On the sidelines of the COP26 Summit, the President also held a bilateral meeting with Palestinian Prime Minister (PM) Mohammad Ibrahim Shtayyeh and emphasized Indonesia’s commitment to continually support the struggle of the Palestinian people to become an independent, fully sovereign, and self-determined state with East Jerusalem as its capital.

Meanwhile, during a bilateral meeting with Slovenian Prime Minister Janez Janša, President Jokowi expressed hope that Slovenia will push for the finalization of the Indonesia-EU Comprehensive Economic Partnership Agreement negotiations.

The President also held a bilateral meeting with British Prime Minister Boris Johnson where the two leaders agreed to enhance economic cooperation between the two countries.

In the meeting, PM Johnson highlighted the importance of support in the forms of green investment, multilateral development banks, and affordable green technology.

In a bilateral meeting with President of the United States Joe Biden, President Jokowi discussed four main issues, namely cooperation with the US in the health sector, the importance of strengthening economic cooperation between the two countries, climate change issues, and Indonesia’s G20 Presidency next year. In addition, the two leaders also exchanged views on various international issues, including global democracy related to Myanmar and Afghanistan.

On the second day, President Jokowi was one of the three speakers at the World Leaders Summit on Forest and Land Use. In his remarks, President Jokowi addressed the forest management issue which must take into account the aspects of environmental policy with economic and social.

The President also reiterated Indonesia’s readiness to share experiences about its success in overcoming forest and land fires. (BPMI of Presidential Secretariat/UN) (RIF/LW)