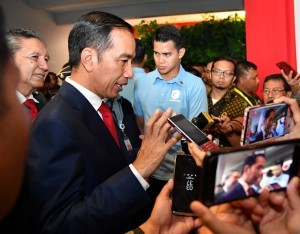 Indonesia is a big country blessed by God with a variety of diversity and enormous potentials, according to President Joko Jokowi Widodo.

Those potentials and strengths, according to the President, will emerge if all components of the nation unite; therefore, the people shall maintain the unity, harmony and brotherhood of the nation.

“Local elections and Presidential election usually escalate the situation. Please be careful, we are all fellow countrymen, the President said

President Jokowi further said that the elections that only occur once in five years should not divide the nation and should not make the people hate each other for different political choices.

According to the President, the festival of democracy should be about programs, ideas, achievements, and track records and should not become a momentum for insult, hate, or defamation that violate Indonesian manners, ethics, and values. ??

The President also said that he has been a victim of slander when he was accused of being a cadre of Indonesian Communist Party (PKI).

At the end of his speech, the President invited the people to uphold the religious values, ethics, manners and courtesy. Those values, according to the President, ??are embedded in Indonesian customs and culture and in every religion that the people embrace. “Let us maintain our harmony, brotherhood, and unity. Don’t let the presidential election and the local elections destroy our brotherhood,” President Jokowi concluded.