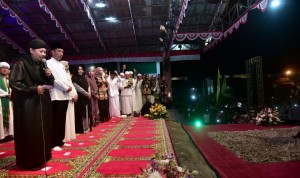 The President told the participants attending the event that Indonesia is a great country with more than 260 million people living in 17 thousand islands, 514 regencies and municipalities, and 34 provinces.

Therefore, the President invited all parties to continue to maintain unity, brotherhood and national harmony and not let the differences destroy the national solidarity.

“If there is an election, lets say a regent election, you should vote the candidates based on their achievements, track records, programs, ideas, and platforms,” the President concluded.