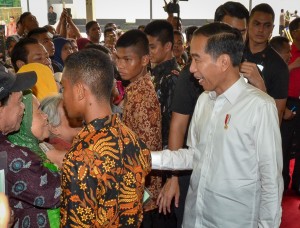 The people are free to have different political preferences, according to President Joko Jokowi Widodo. He added that local, regional, or national elections are routine events in every five years so that the different political choices should not generate conflict in communities.

“In Regional Election, Regent Election, Mayor Election, Governor Election or Presidential Election, you should cast your vote based on the candidates achievements, experiences, programs and ideas,” President Jokowi said in his remarks during the distribution of land certificate at Arcici Football Field, Jakarta, Saturday (26/1).

On that occasion, the President once again clarified rumors saying that he is a member of now-defunct Indonesian Communist Party (PKI). He explained that the PKI was banned in 1965-1966, while he was born in 1961. That means he was four back then. Is it possible for a toddler to join the party? the President asked.

The President also invites all parties to uphold civility, ethics, manners, and courtesy in politics.

“Having different political choice is not a problem, but slander, hate speech, or insult must be avoided,” President Jokowi concluded.