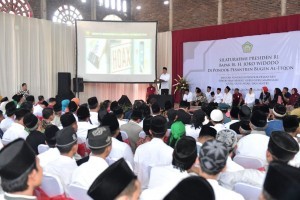 Just like the previous year, President Joko Jokowi Widodo has been ranked in the top 50 on this years list of the world most influential Muslims in 2019 by the Royal Islamic Strategic Studies Center based in Jordan.

Along with President Jokowi, there are two other Indonesian Islamic figures who are included in the top 50 of the list, namely Chairman of Nahdlatul Ulama Excecutive Board (PBNU) KH. Said Aqil Siradj and Chairman of the Indonesia Ulema Council (MUI) of Central Java Chapter, Maulana Al-Habib Muhammad Lutfi bin Ali bin Yahya (Habib Lutfi).

Regarding the award, President Jokowi said that it is an honor for all Indonesian people.

“Alhamdulillah (praise be to Allah), I think it’s an honor for all of us, the nation with the largest Muslim population in the world,” President Jokowi said after visiting Bugen Al-Itqon Islamic Boarding School, Semarang, Central Java, Saturday (20/10).

The President further said that he will stay focused in doing his job. “I will continue to perform my duty,” the President said.

In the meantime, in his remarks during a friendly visit to Bugen Al-Itqon Islamic Boarding School, President Jokowi expressed his concern over the spread of fake news, hoaxes, and slanders on social media related to national and local election.

(Fake news, hoaxes and slander) do not comply with Indonesian manners, Indonesian ethics, and our Islamic values,” President Jokowi said, adding that he invited all people, including the Islamic Boarding School, to develop human resources with good character.