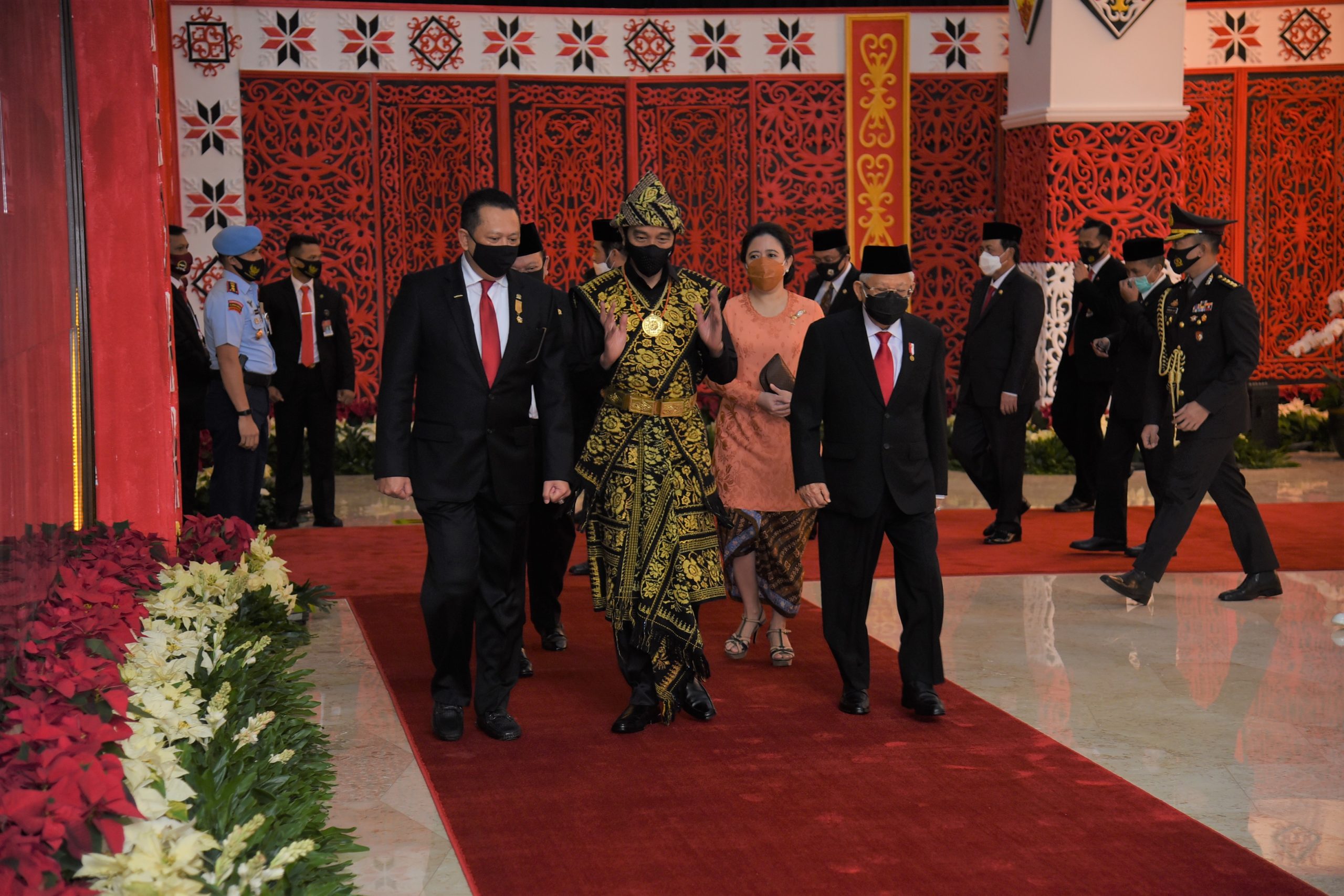 President Joko “Jokowi” Widodo warmly welcomed the moral appeals full of wisdom from the Ulemas, religious leaders, and culture bearers to make the momentum of the pandemic as a new awakening to make a big leap.

“As many as 215 countries, with no exception, are currently facing these hard times amid the COVID-19 pandemic. According to the WHO, as of 13 August, there have been more than 20.4 million cases worldwide with the total number of deaths reaching 744,000 lives. All countries, be it underdeveloped countries, developing countries, or developed countries have been experiencing setbacks due to COVID-19,” President Jokowi stated at the Annual Session of the People’s Consultative Assembly (MPR RI) and the Joint Session of the House of Representatives (DPR RI) and the Regional Representatives Council (DPD RI) on the Occasion of the 75th Anniversary of the Proclamation of Independence of the Republic of Indonesia, at the MPR/DPR/DPD RI Building, Senayan, Jakarta, Friday (14/8).

The President also said that the ongoing economic crisis is also the worst in history. In the first quarter of 2020, the economy grew by 2.97% but in the second quarter, the growth contracted by 5.32%. “Economies of developed countries even reported negative growth, even reaching more than minus ten to minus 17-20%. The setbacks experienced by several developed countries can serve as a momentum to catch up,” he added.

The current economic situation, President Jokowi said, is analogous to a computer crash in which countries are currently facing stagnation. All countries must undergo a brief process of shutdown, restart, and reboot. All countries also have the opportunity to reset all the systems. According to him, it is the time for Indonesia to fundamentally renew itself, to make a major transformation, to implement grand strategies in the fields of economy, law, governance, social, culture, health, and education. Indonesia must turn this crisis into an opportunity to make big leaps.

At the age of 75, Indonesia has emerged as an upper middle income country. And 25 years from now, at the centenary of the Republic of Indonesia, the people of Indonesia must achieve great progress and make Indonesia a developed country.

“We must undertake fundamental reforms in the way we work. Our readiness and speed are being tested. We had to evacuate Indonesian citizens from the COVID-19 pandemic zone in China. We had to provide hospitals, isolation rooms, medicines, and medical equipment, and uphold discipline in following health protocols. Everything must be done quickly in a very short time,” the President stated.

To that end, the President went on to say, the Government must quickly change programs, adjust working programs with the current situation, and carry out budget reallocation in a short time. The Government has issued Government Regulation in Lieu of Law (Perppu) Number 1 of 2020 that has been approved by the House of Representatives (DPR) to become Law Number 2 of 2020, “I express my gratitude to the members of the House for the speedy work. We have also been in synergy with central bank Bank Indonesia, the Financial Services Authority (OJK) and the Deposit Insurance Agency (LPS) to rebuild the economy,” he said.

The crisis, the President said, has forced the Government to change the way of work, from standard ways to outstanding ways, from ordinary ways to extraordinary ways, from a long and complicated procedure to a smart shortcut, from being procedure-oriented to being result-oriented.

“We have to change our mindset and work ethic. Flexibility, speed, and accuracy are imperative. Efficiency, collaboration, and the adoption of technology must be prioritized. We must improve our national self-discipline and national productivity. We must take lessons from this crisis. We must not let the crisis bring about setbacks. In fact, we must capitalize on the crisis as a momentum to make a big leap,” the President concluded.(MAY/TGH/EN)