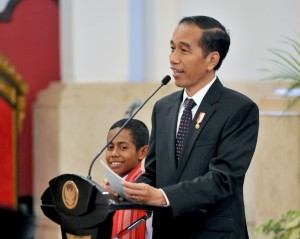 Among those national role model is Yohanes Ande Kala (known as Joni), a 7th grader of Silawan Junior High School, whose video of climbing a 12-meter flagpole to disentangle the twisted rope during an Independence Day ceremony in Belu Regency, East Nusa Tenggara province on Friday (17/8) has gone viral.

On that occasion, the President asked Joni what he wants and Joni replied that he wants to to have a bicycle, a house, and to become an army.

I will grant your wishes. All you have to do now is study hard (Joni got a scholarship from several institutions) and work hard to achieve your goals, the President said, adding that if Joni really wants to become an army, he can immediately register and will be accepted as long as he is qualified for the health requirements.

President Jokowi also said he was surprised to see Joni’s viral video and added that those who were present at the ceremony would not have dared to do what Joni did (climbing up the flagpole).

Joni, you know it is dangerous to climb that high. I was worried when I watched the video. Could you please explain to us in details? President Jokowi asked.

Joni then recalled that he actually had a stomachache when attending the 73rd Independence Day Ceremony and after being taken care of at the schools health service room, he began to fall sleep.  Nevertheless, he added, he suddenly he heard the voice of the Deputy Regent of Belu who was presiding over the ceremony, asking the participants of the ceremony who could climb the flagpole (to disentangle the twisted rope).

I immediately got up, ran, removed my shoes, and started to climb, Joni continued his story.