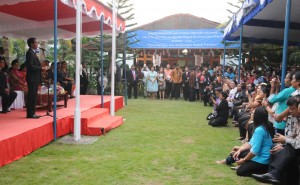 At the end of his state visit in Timor Leste, President Joko Jokowi Widodo, along with First Lady Ibu Iriana Jokowi met with Indonesian Citizens living in Timor Leste.

Indonesian Citizens who gathered at the Indonesian Embassy in Dili were very delighted that President Jokowi and the First Lady were willing to make time to meet them.

Starting his remarks, President Jokowi said that the current development is no longer Java-centrism but it is now Indonesia-centrism.

The President also said that in the future, Indonesias border areas will be further developed.

I will go to Kupang in December. You can meet me there, the President said.

President Jokowi went on to say that development in border areas would not only be done in East Nusa Tenggara (NTT) Province but also in other regions such as Entikong.

The next development program, the President added, starts from rural areas or villages.

Our priority is to develop areas in Eastern Indonesia, the President said.

He also said that he had just visited Nduga and he had instructed related ministries to build roads connecting Wamena and Nduga.

I take no for an answer. The road must be built. My order is to finish the road, the President firmly said.

After the meeting, President Jokowi returned to Jakarta on Tuesday (26/1) around 7.00 p.m. local time.