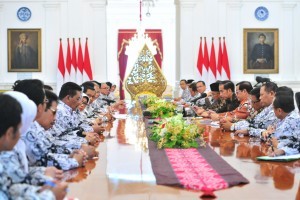 President Joko Jokowi Widodo invited officials of the Indonesian Teachers Association (PGRI), at the Merdeka Palace, Jakarta, Wednesday (5/12) to hear their aspiration that probably can be realized by the Government and the PGRI.

We want to change national strategic development from developing infrastructures to developing human resources, and it will be started next year, President Jokowi said.

President Jokowi reiterated his message during the peak of the 2018 National Teachers Day commemoration and the 73rd Anniversary of the PGRI at the Pakansari Stadium, Bogor Regency, West Java, Saturday (1/12) that quality of teachers is the key and role of teachers is crucial in developing human resources.

Therefore, the Government wants to hear suggestions from teachers on tasks that we must do, how to improve teacher and principle quality in which I believe are the key to develop human resources in Indonesia, President Jokowi asserted.

On that occasion, President Jokowi also asked inputs from non-tenured teachers who have opportunity to be appointed as civil servant in this years civil servant recruitment process through Government Personnel with Employment Contracts (PPPK) scheme.

PGRI Chairwoman Unifah Rosyidi welcomed the Presidents request and expressed her appreciation for the invitation to meet with the President at the Merdeka Palace, Jakarta.

It never crossed our mind to be here, we are touched. We, teachers can feel the President has given us huge attention, Unifah said.

Accompanying President Jokowi during the meeting were, among others, Minister of State Secretary Pratikno, Cabinet Secretary Pramono Anung, and Minister of Education and Culture Muhadjir Effendy. (FID/JAY/ES)