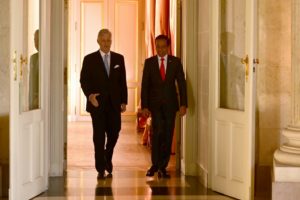 Upon his arrival, President Jokowi was welcomed by the King at the entrance of the Castle of Laeken, which is the official residence of the King and the Royal Family. Afterwards, the two leaders took a group photo and headed to the meeting room.

In the meeting, President Jokowi expressed his appreciation for relations between the two countries which have been established for more than 70 years.

“For more than 70 years, Belgium has been Indonesia’s important and strategic partner. As a member of the United Nations Commission for Indonesia in 1949, Belgium became an important part of the history of Indonesian independence. Belgium was also among the first European countries to recognize Indonesia’s independence,” the President stated.

“I think our close ties serve as important capital for Indonesia-Belgium’s partnership in the future,” he said.

On that occasion, both leaders also discussed the strengthening of cooperation in economic and climate change fields. (BPMI of Presidential Secretariat/UN) (RAS/HD/LW)